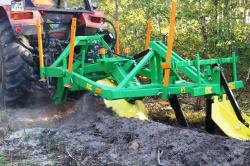 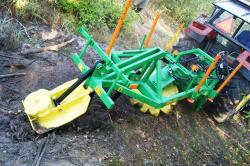 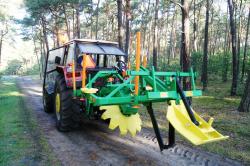 The P1T-H plough equipped with a subsoiler and own hydraulic system has been designed for a complex pre-planting soil cultivation. It combines advantages of an active plough and cultivation with a soil ripper.

A main advantage of the active disc plough is leaving the fertile soil layer in almost intact condition, and shoveling only the top layer that is dry and loose. On periodic wetlands there is a possibility of forming ridges after adjustment of the angle of the transmission box and after disassembling the subsoiler.

Single-disc active plough with own hydraulic system is a new construction based on existing P1T ploughs. It has a modified power transmission – own hydraulic system – PTO shaft powered, designed for soil plowing and cultivation on forest areas, works with a tractor of a power of 60-90 kW. The active P1T-H plough has been designed for tractors of a low efficiency of the hydraulic system. The minimum requirement for a proper operation of the plough is 40-50 l/min.

For tractors of a high efficiency of the hydraulic system it is recommended to apply the early P1T plough.

The single-disc plough P1T-H aggregated with a tractor while in the working position and being carried on the area for planting makes a furrow formed as a result of a rotary motion of the milling disc that tears off the top layer of soil and disposes it aside. The furrow is U-shaped and its bottom is aerated to a depth of 4 cm. The ridge is formed from mixed top soil layer. The plough can be applied for preparation of post-clearcutting or post-agricultural areas for planting as well as for introduction of planting into existing forests. After disassembling the subsoiler and after adjustment of the angle of the transmission box there is a possibility of forming ridges on periodic wetlands. The single-disc active plough with a subsoiler reduces costs in preparing soil for planting.

A single work ride allows for: 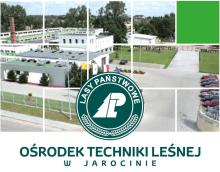 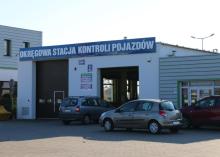